Here are the Top 6

False. Some sunroofs do indeed leak. However, good quality sunroofs do not. There is a big difference in quality and performance between premium sunroofs and cheaper sunroofs. The differences are primarily in the seals and hinge/handle hardware. Most premium sunroofs use a more expensive seal made primarily of silicone with a 20 year plus life expectancy and strong, heavy duty handles and hinges made of polycarbon – most economy roofs however have seals made of neoprene that once exposed to weather, rapidly deteriorate along with weak handles and hinges often made of plastic that won’t hold the glass secure... all leading to water leaks.

#2: All installers and companies that sell sunroofs are the same

No, that’s not true. The best sunroof in the world won’t make up for a poor installation by an inexperienced installer. However, a seasoned installer can take a poor quality sunroof and make the installation look great, and you often won’t notice the difference right away. Most people find they got the best results hiring a company that has been around for more than a year or two and install sunroof as a specialty, not a sideline. Most of these types of shops employ experienced, factory-trained installers that have installed literally hundreds of sunroofs in vehicles prior to working on yours.

#3: All aftermarket sunroofs are the same in terms of quality. The brand really doesn’t matter

Not the case. As I’ve already mentioned in misconception #1, there are big differences, especially in the seals and hinge/handle hardware. High quality sunroofs usually include a lifetime "as long as you own it" warranty on all the parts, except the glass. Another important difference is the frame. Most good sunroof frames are made of aircraft grade extruded aluminum, powder coated (often more than once) and then baked at high temperature and usually come with a lifetime warranty against flaking or corrosion.

#4: A warranty is not important

False. A reputable company that installs sunroofs is not afraid to stand behind its sunroofs or installations, but there are companies that won’t. Be very wary of any company that won’t include a written, lifetime "as long as you own it" leak proof warranty on your sunroof and it’s installation, as well as a warranty on all the parts (except the glass) preferably again, as long as you own the vehicle. Review it carefully before you make a decision. Steer clear of those who don’t have one to show you. They probably won’t be around to help you when you need it.

#5: The only reason to get a sunroof is because your car doesn’t have air conditioning.

No, that’s not true. Although some people may invest in a sunroof because their car isn’t equipped with air conditioning, most people enjoy the sporty, open-air feeling they get with a sunroof. Sunroofs can "open up" a small car, giving it a much larger feel. A sunroof provides superior ventilation and really let’s you enjoy those beautiful sunny days. And don’t forget, most sunroofs have removable glass so when you have the urge... you can enjoy the wind in your hair too! It’s almost like owning a convertible!

#6: The company that gives you the lowest price is the one you should hire.

No. Problems can arise from the "cheapest price" companies. The two most common problems are: 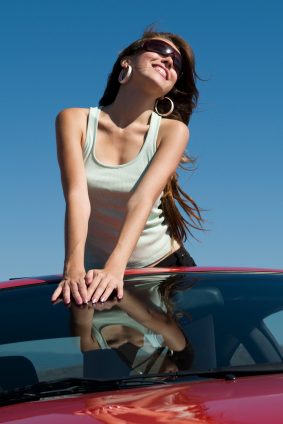